François Delattre, the French ambassador to the United States, will return to Atlanta Oct. 25 for this year’s France-Atlanta program, the award-winning educational collaboration between the Consulate General of France and the Georgia Institute of Technology. Mr. Delattre will join Georgia Gov. Nathan Deal and Mayor Kasim Reed in officially opening the program, which will include about 15 events showcasing French innovations in science, business, culture and humanitarianism from Oct. […] 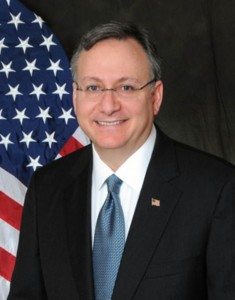 In 2011, for the first time ever, trade between the United States and Singapore eclipsed $50 billion. That the milestone was reached during the tenure of U.S. Ambassador David Adelman is likely a coincidence, but it came at a perfect time for the former Atlanta attorney and Georgia state senator. Since leaving Atlanta to take his posting in April 2010, Mr. Adelman has been on the leading […]

Emory University graduate and native of Augusta Larry Palmer is the recently appointed U.S. ambassador to Barbados and the Eastern Caribbean. Previously, Venezuela’s president, Hugo Chavez, refused Mr. Palmer’s appointment as ambassador to his country, which prompted the U.S. to revoke the visa of Venezuela’s ambassador Bernardo Alvarez Herrera on Dec 28, 2010. According to the […]

Since China‘s famous Soong sisters attended Wesleyan College in the early 1900s, the Macon women’s school has always had strong links to Asia. It has also hosted students from Russia, but it wasn’t until a native son was posted as ambassador to Mongolia that it began recruitment in the cold, sparsely populated country sandwiched between the two great powers. This fall the first two Mongolian students began classes […]

John E. Parkerson Jr., the honorary consul of Hungary based in Atlanta, has joined the law firm Hall Booth Smith and Slover PC to provide counseling on general corporate matters as well as international transactions. Since 2007 Mr. Parkerson has served as Hungary’s honorary consul for Georgia, Tennessee and the Carolinas. He also is president […]

Dutch-born Sandra Roelofs-Saakashvili, the first lady of the Republic of Georgia and an advocate for orphaned and abandoned children, was honored at a reception at the Southern Center for International Studies in Atlanta last week. Her visit followed Georgia President Mikhail Saakashvili’s trip here several months ago when he received an award from the American […]