Webinar: Venezuela – A Path to Democracy to Preserve Regional Security

Chargé d’Affaires James Story will present a webinar on:

“VENEZUELA: A PATH TO DEMOCRACY TO PRESERVE REGIONAL SECURITY”

A Members Only Event – This event is complimentary for ACIR members

On March 31, 2020, the United States introduced the Democratic Transition Framework for Venezuela as a roadmap for Venezuelans to achieve a peaceful, democratic transition. Since its announcement, 34 countries around the world have endorsed the proposal. During this encounter, Chargé d’Affaires James Story will discuss U.S. relations with Venezuela, U.S. support for Interim President Juan Guaidó and the democratically elected National Assembly, as well as the humanitarian and economic crisis brought about by Nicolás Maduro that Venezuelans are currently facing. 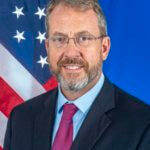 James “Jimmy” Story is the Chargé d’ Affaires, for the Venezuela Affairs Unit, located at the United States Embassy in Bogota, Colombia.

Most recently, Mr. Story served as Chargé d’ Affaires at the United States Embassy in Caracas, Venezuela, until the temporary suspension of operations and the withdrawal of diplomatic personnel due to security concerns.

Previously, Mr. Story served as Consul General in Rio de Janeiro. Other recent positions include Director of the Bureau of International Narcotics and Law Enforcement Affairs (INL) Office for the Western Hemisphere, Director of INL Office in Bogota, Colombia, and Senior Civilian Representative in Southeastern Afghanistan.

A career Senior Foreign Service Officer, Mr. Story has also served in Sao Paulo as the Deputy Principal Officer and Political-Economic Chief; Brasilia as the Regional Environmental Affairs Director for South America; Washington D.C. in the Office of Marine Conservation in the OES Bureau; Maputo Mozambique as Economic-Political officer; Guadalajara, Mexico as a Consular Officer; and at the U.S. Mission to the United Nations as the Ambassador’s staff assistant. He is the recipient of numerous State Department and interagency awards including the Superior and Meritorious Honor Awards, the Department of the Army Superior Civilian Service Award, and the Warren Christopher Award for Outstanding Achievement in Global Affairs.

Mr. Story grew up in the small town of Moncks Corner, South Carolina and graduated with a B.A./B.Sc. in interdisciplinary studies from South Carolina College at the University of South Carolina. He also received a M.Sc. in Foreign Service from Georgetown University. He speaks Portuguese and Spanish. He is married to Susan West Story, and they have one son, James McKelvey “Mac” Story.