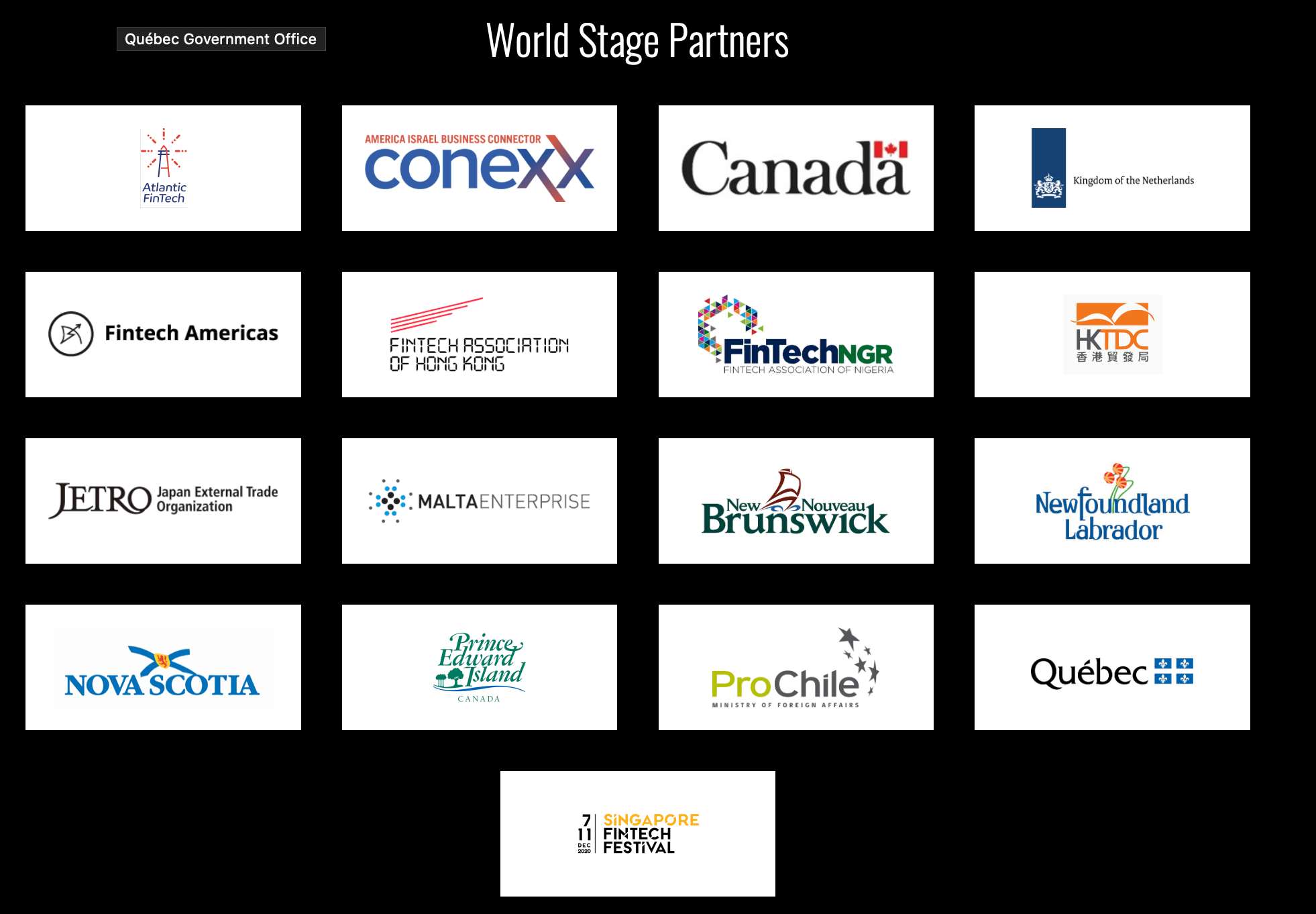 The many supporters of the World Stage, which takes on a new level of prominence in Fintech South's new virtual format.

Fintech South, the premier conference on financial technology in Georgia and throughout the region, is looking at the bright side of going virtual next month due to the pandemic.

While the move from Mercedes-Benz Stadium to a computer screen could be seen as diminishing the event’s cachet, it also comes with an opportunity: positioning Atlanta’s fintech prowess on multiple continents.

This year’s event will include an all-day World Stage Oct. 6, with staggered content “following the sun” across three world regions, starting in the morning in Europe, the Middle East and Africa, moving to the Americas in the afternoon and culminating in the evening in Asia (the next morning on that side of the globe).

Organizations with links to Atlanta — from the Singapore Fintech Festival to London and Partners to the Fintech Association of Nigeria, and many more — will highlight their ecosystems in introductory interviews followed by three-hour sessions featuring panels and keynotes from prominent fintech executives in their countries.

The interaction will have the effect of introducing Atlanta to a broader segment of the world, Larry K. Williams, president and CEO of the Technology Association of Georgia, who said Atlanta has “quietly grown an empire” that needs to be more widely recognized.

“We’re victims of our own Southern sensibilities. We tend to be understated, we tend to downplay things,” he told Global Atlanta.

But Georgia’s argument as a global hub for at least the payments sector has grown even more since the top six players in the field consolidated over the last few years, most of them keeping massive headquarters in the state.

“Georgia is the epicenter of all of that, and it’s vectored here. That is a global consolidation of an industry and that is not happening anywhere else,” Mr. Williams added. Fintech accounts more more than 30,000 jobs here,

There was some apprehension about shifting such an impactful event online after three straight years in downtown Atlanta’s flashiest venue.

But in addition to thinking through what would be lost without in-person sessions, TAG and its partners eventually began to consider what might be gained.

Andrew Morris, the executive director and content chair for Fintech South who helped develop the virtual strategy and bring it to fruition, connected the group with Brella, a platform-offering AI-matched one-on-one networking meetings and virtual trade show booths with homepages for each exhibitor. Another advantage of online: a massive content catalogue that will include 60 recorded hours, accessible even aft the fact by any registrants in the world.

Initially TAG had pushed back the in-person conference until this fall, with Mercedes-Benz Stadium offering flexible terms, but the pandemic did not cooperate.

“We don’t necessarily know the timing of when we can get a few thousand people safely together for an event in the stadium — we hope it’s soon — but this has become a really important time of year for our Atlanta community in fintech, to bring our local folks together and to share with the world, and we didn’t want to let the opportunity pass by and wait a year to do it again,” Mr. Morris said.

On the international side, the virtual format means the ability to accommodate more incoming requests for engagement.

Mr. Williams said this year’s experiment could turn into a permanent feature in the future, but he also hopes it will whet the appetites of groups that were hesitant before to send a delegation due to budget concerns.

“What I’m excited about is the opportunity to give exposure to how great it would be to make a trip,” Mr. Williams said.

In light of COVID-19, Mr. Morris said he’s watching models around the world, like the Singapore Fintech Festival, which is hosting a hybrid event this fall with multiple hubs around the world connecting in via videoconference.

TAG, which hosted an annual forum through its fintech society for eight years before broadening the scope to Fintech South in 2017, leaned on international partners like local consulates and trade offices to find participants on the World Stage.

It also asked its company members to mine their own global ties: Atlanta-based startup Trust Stamp, for instance, has an operation in Malta and recruited the Mediterranean island to participate.

Canada has been a strong supporter of the conference since the outset, as have local consulates, chambers and trade offices representing Israel, Ireland and the United Kingdom.

“We are really a connected community, and we have an inviting way of bringing the international community in,” Mr. Williams said, recalling the collaborative spirit toward foreign investment recruitment he saw when he worked in economic development in Atlanta and Miami.

Co-chairs of the World Stage, Fintech Atlanta‘s Kristina Aranas Morris and Grant Wainscott of the Metro Atlanta Chamber, wrote in a blog post that the pandemic provides an opening for communities helping others navigate global networking at a time when many would be traveling and building new relationships the old-fashioned way.

“Countries and regions are eager to build new ties, share their successes and challenges, highlight their companies and technology, and connect in new ways. This will only benefit metro Atlanta and Georgia’s reputation as a global connector and marketplace and allow for our fintech ecosystem to take center stage in one of the most important events of the year,” they said.

While the World Stage lineup is now pretty much set, Mr. Morris said TAG is still keen to work with consulates, chambers, trade offices or other international groups that would like to bring in groups.

The conference as a whole runs Oct. 5-9, with an expected 2,500 attendees — a third of them C-level executives — and more than 250 speakers and more than 60 hours of content accessible to ticket holders. Register here.

See the full list of international partner organizations here or below: