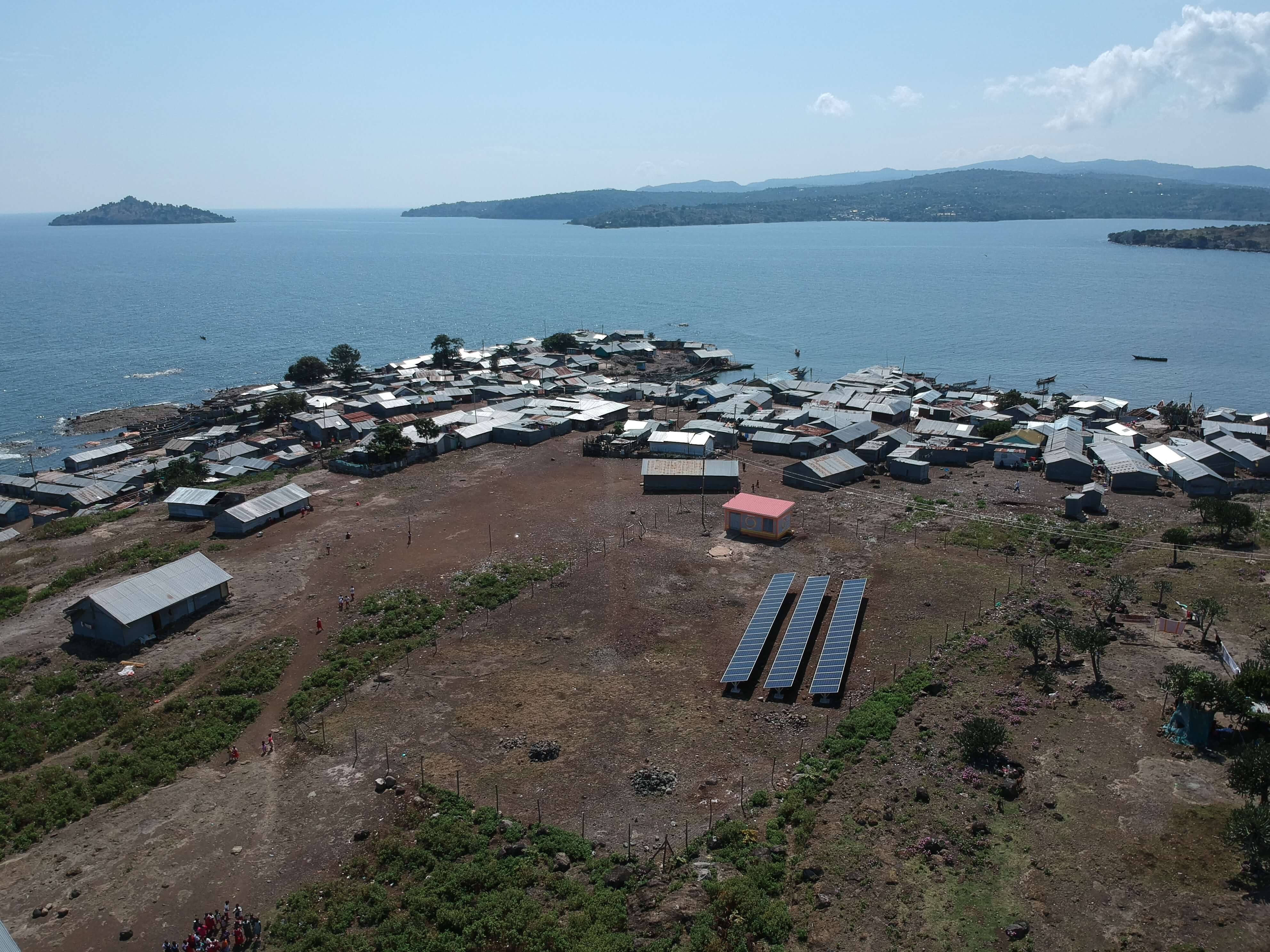 Atlanta-based Renewvia Energy is building a business in Africa providing microgrids like this one in Ringiti, Kenya, an island fishing community situated in Lake Victoria.

A pivot for some companies may mean tweaking a product line or embracing a new marketing plan. In Renewvia Energy Corp.’s case, it landed executives in African fishing villages, by way of South America.

After its founding in 2009, Renewvia very quickly realized that its proposed business model — owning and operating rooftop solar arrays and selling the power to owners or tenants — wasn’t going to work.

“It became apparent that we were going to have to expand our outlook on different opportunities,” said President Eric Domescik, who met co-founder Trey Jarrard through mutual fraternity contacts. Both are University of Georgia graduates committed to raising their families in Atlanta.

The company began working with poultry farmers and peanut growers in various parts of rural Georgia, leasing the land and producing power for farm operations while selling excess capacity to utilities at guaranteed prices.

With a 30 percent federal tax credit still in place and solar module and rack prices dropping, the payoff time for industrial-scale solar systems also started to come down. Factories, warehouses and other end users began to “monetize the roof” by investing in their own systems.

That’s when Renewvia made its first pivot, becoming an engineering, procurement, construction (EPC) contractor offering turn-key solutions rather than trying to own and operate the plants on its own, which had promised to be a capital-intensive proposition.

“We’re basically giving them the opportunity to own 50-60 percent of their power consumption for the next 30 years,” Mr. Domescik said of the company’s U.S. business.

That continues to make up the bulk of Renewvia’s revenues, but slowly, opportunities around the world have begun to lure the company back to the owner-operator model that it has largely abandoned here. The opportunities may be far away, but Renewvia sees promise in the long-term economics of building a power infrastructure from scratch in places that desperately need it.

The journey started in Buenos Aires, where the company’s current director of Latin American operations, Fernando Bausili, got wind that solar would become a promising opportunity across the Rio de la Plata in Uruguay.

A debt trader and real-estate developer at the time who had a relationship with Renewvia’s founders, Mr. Bausili heard of a tender by Uruguayan government utility UTE for 200 megawatts worth of solar projects.

Renewvia took a risk, scrambling a team, flying down for a week of presentations and plunking down a half-million-dollar entry fee to qualify for the bid. It paid off.

“We decided there was something we wanted to do and I’ll be darned if we didn’t win the lottery,” Mr. Domescik said. After the company was chosen to produce 60 megawatts, it had to secure land within 30 days.

Renewvia handled all the environmental and civil permitting, engineering and even negotiated the power-purchase agreement. Then a Spanish buyer came knocking. Renewvia sold out, for better or worse.

“We got the experience out of that that we needed,” Mr. Domescik said, noting that holding the property would have been the way to wring more profit out of the deal. That would be instructive in its next opportunity.

With the U.S. stabilizing, Renewvia set out to find more global deals. It had worked on a project on the Pacific Island of Guam, but that was a reactive endeavor. The company needed a more strategic approach.

Africa, where 600 million people lack access to power, was a holy-grail market, but it’s a huge continent fragmented among 54 nations with very different regulatory systems and governance structures. It was a Kenyan contact, Pam Onyanyo, that came to Mr. Domescik with a concrete plan to start making inroads.

A former consultant for PwC, Ms. Onyanyo had come to the U.S. as a student but always planned to contribute to her homeland’s economic ascent.

While back in Kenya to work on a U.S. government-backed housing project, she saw that the national government had finally clarified the requirements for companies seeking approval to become power suppliers.

With he and Mr. Jarrard as partners, Ms. Onyanyo moved back to Kenya and set up a Renewvia subsidiary. In a market largely dependent on grant funding, the company decided to launch a pilot plant of its own after receiving government approval to operate as a power generator.

They started in Ms. Onyanyo’s home region, the Nyanga Province on the shores of Lake Victoria on the country’s southwest border, near Uganda. And to say they started small was an understatement.

After hitting bureaucratic roadblocks at the national level, Renewvia worked out a deal with Ms. Onyanyo’s local government contacts. The company would fund the installation of a small solar array to power the beach management unit on the tiny island of Ringiti. BMUs, as they are called, are the buildings where the government manages the seafood harvest, buying from fishing families forming what amounts to a local cooperative.

“We knew that we could do that really inexpensively and it would go a long way as far as giving us instant credibility in the region,” Mr. Domescik said.

That caught the eye of the U.S. Trade and Development Agency, which has a mandate to promote U.S. exports and often does so by pairing American services and solutions with foreign infrastructure projects. This was toward the end of President Obama’s second term, just after the announcement of the $7 billion Power Africa initiative and the related Electrify Africa Act in Congress.

One component of the act was to drive public-private partnerships to get 50 million Africans connected to the grid for the first time. The USTDA underwrote a feasibility study that led Renewvia to its new microgrid model, which it plans to deploy all across Africa to places like nearby Uganda (where it already has a Georgia Tech grad on the ground helping with the Kenya projects) as well as all the way across the continent in Nigeria. The key criterion is a solar regulatory environment that is clearly defined, and the company plans to enter new markets as capital and comfort allow.

Communities, Capital and the Connected Future

In Kenya, Renewvia’s model has relied on a highly relational approach that has allowed the company to gain community buy-in relatively quickly.

Connecting a microgrid isn’t nearly as easy as getting one approval from a state power utility and dropping a large-scale solar farm in the middle of Georgia pasture land. Renewvia has had to navigate the cultural milieu of the area, figuring out which tribal kings to approach for signatures that will commend its infrastructure projects to the central government. One local staffer, Gordon Oliech Odhiambo, speaks more than 10 dialects. Mr. Domescik said it was easy to see that he and co-founder Mr. Jarrard would have to play a supporting role.

Ultimately, the sheer need of communities makes the pitch for clean, affordable energy relatively simple. Fishermen lose a lot of their harvest due to lack of cold storage, while kerosene fires cause injury, death and property damage. Everyone has a mobile phone and needs a way to charge it.

“They want power. That’s the bottom line. They’re piecing it together with kerosene and they’re having to buy diesel and the generators break down,” Mr. Domescik said.

On the islands of Ringiti and Ndeda in Lake Victoria, Renewvia built the first electrical infrastructure communities with a combined population of 10,000 people had ever seen, starting with separate 20- and 10-kilowatt microgrids.

Once the upfront capital was deployed and the grid built, Renewvia hired a local team of installers to go around to village homes asking if they’d like to connect to the grid. If so, they pay a connection fee, and the installers drop a line in.

“Collaborating with community leaders throughout the process, these facilities have already generated over 350 connections — leading to the export of hundreds of U.S. smart meters and serving approximately 2,000 families, schools, clinics, local entrepreneurs and key fishing businesses central to the islands’ economy,” said spokeswoman Ashley Chang.

Building on some of its previous U.S. solar experience, Renewvia uses smart meters to monitor power consumption and allows customers to pay for power on a prepaid basis using a mobile payment solution developed in-house. Kenya is well-known for the widespread adoption of the M-PESA mobile payments platform, and Commercial Bank of Africa clears the payments within seconds.

Now armed with what it calls the Rural Microgrid Development and Operation Model, Renewvia is looking toward further African expansion and is seeking to raise $2.5 million to develop six new facilities, including refugee settlements. Its overall pipeline includes 25 “permitted or semi-permitted sites” in Kenya and Nigeria.

The spinoff businesses that come post-electrification — think refrigerated drugs or drinks, or Internet cafes and televisions —  is what excites Mr. Domescik and the team most.

And the human angle helps the company feel confident that they’re making the right moves, not just smart financial decisions.

That said, competition is fierce from idealistic NGOs and other entrepreneurs who who may think solar is an easy panacea for Africa’s development challenges. That’s where Renewvia’s U.S. track record and knowledge base is significant.

“We’re leveraging our vast experience — in our industry 10 years is a long time. We know how to build it and we know the value of first-mover advantage.”