Global Atlanta held its fourth virtual Consular Conversation Oct. 8, featuring Belgium, Ireland and the Netherlands. To watch the video, sign up for a Consular Conversations annual pass, which offers priority registration, advanced notification, access to all recordings and entry to all 2021 in-person luncheons.

Amid a resurgence of COVID-19 cases across Europe, three of the newest European consuls general in the South stressed the importance of solidarity and economic cooperation both on the continent and worldwide.

Europe’s weekly case load increased more than 30 percent during the week of Oct. 5-11, with several countries responding with new tiered restrictions and curfews in an effort to stave off large-scale lockdowns and border closures like those imposed during the height of the pandemic in April.

During a virtual Global Atlanta Consular Conversation sponsored by Miller & Martin PLLC Oct. 8, diplomats from Belgium, Ireland and the Netherlands outlined how their countries were protecting citizens, even as EU officials and national leaders work diligently to keep trade flowing and to disburse an outpouring of funds aimed at supporting workers and businesses.

They also described their respective restrictions on inbound travel from the U.S., with some exceptions being granted for dire family situations or pressing business matters.

Even at the height of the lockdown, which included an unprecedented halt to the flow of people in Europe’s borderless Schengen Area, Michel Gerebtzoff of Belgium said Europe was able to keep the borders open for all-important trade in goods and medical equipment.

“We put rules in place to limit unnecessary travel, and we managed to keep everything under control. But in such an integrated economy like we have in the EU, we also managed to not hinder travel beyond what was strictly necessary,” Mr. Gerebtzoff said.

Once the worst was over, though, some of the personal restrictions were relaxed, prompting a surge in holiday travel. Some experts blame that policy for the current uptick in cases, which is affecting the young at a much higher rate than the initial surge in the Spring.

Still, most countries are eschewing the large-scale national lockdowns of the spring in favor of localized restrictions in designated hotspots, and the EU at large continues to remain focused on a global approach to the pandemic.

The EU has pledged up to 400 million euros to the COVAX Initiative, a global effort to provide all countries access to COVID vaccines once they are approved.

Belgium is a “powerhouse” in this realm as the world’s biggest producer of vaccines on a per capita basis; companies with a Belgian presence produce 80 percent of the world’s vaccines, Mr. Gerebtzoff said. GSK, a British giant, operates the world’s largest single vaccine development hub in Belgium.

“We don’t do it just out of moral values, but also out of self-interest. We need everybody to be able to fight this pandemic. It doesn’t make sense if every country thinks only for itself because then, at some point, the virus will come back from the outside,” he said.

The Netherlands and Ireland feel similarly. The Netherlands spends 0.7 percent of its full GDP on international development aid, said Dutch Consul General Ard Van der Vorst, a stance which reflects his country’s willingness to work with the rest of Europe and multilateral organizations on solving the crisis.

“The links are huge. We are such an integrated part of the supply chain that it’s sometimes hard to envisage us as a separate country because goods, components and revenues are flowing back to the U.S. from Ireland,” Ms. O’Floinn said. “We have very much stayed open for business, and the supply chains have been operating very effectively.”

For that reason, Ireland feels it should be spared from the Trump administration’s moves to wall off the U.S. from outside production as it aims to boost domestic resiliency in sourcing critical items.

While largely directed at China, the protectionist momentum in the health and technology industries threatens to catch Europe in the crossfire.

Mr. Gerebtzoff, who spent a total of eight years working in China to boost Belgian trade during previous assignments, said European nations are beginning to align more with the U.S. view that Chinese state influence in the private sector, particularly in 5G technology, poses a security risk.

Still, Europe views China as an “innovative powerhouse,” where cooperation on global issues is possible, even as recognition grows that it is also a “systemic rival and economic competitor.”

Companies are responding to current trends by installing a multi-pronged supply-chain approach, offsetting Chinese production with other world regions.

“It’s a question of resilience. This is a trend that will carry on regardless of the short-term political evolution,” he said.

As for growing bilateral investment between the U.S. and Europe, all three consuls noted that travel restrictions installed to fight COVID-19 pose a challenge.

The Netherlands and Belgium are Schengen countries, but business travel there during the pandemic is determined on a case-by-case basis, Mr. Van der Vorst said.

“If people want to travel to the Netherlands for business and are related to current investors or future investments, they can contact us, and we forward that for a decision in the Netherlands,” he said.

Ireland is not part of the Schengen Area but has a common travel area with the United Kingdom. Ms. O’Floinn said the country recently imposed a “self-restriction requirement,” where visitors cannot use public transport nor attend meetings or gatherings for two weeks after arrival.

She added that the pandemic has underscored the need for international cooperation “because no country can do it alone, or can come out of this alone.”

On Oct. 13, EU member states adopted a new coordinated approach to regulate the movement of people in the region, calling for common criteria for restrictions based on each country’s rate of new cases, test positivity rate and testing rates.

With travel largely halted, the consulates have been getting creative to fulfill the economic-development functions of their offices.

Drawing on its fintech prowess and the investments of companies like Backbase in the South, the Dutch consulate recently launched an online platform called OrangeXchangeUSA to introduce Dutch companies to Atlanta-based mentors and investors who can assist them with U.S. expansion.

“Atlanta has a lot to offer with respect to talent, to incentives and to other ways to expand more easily than starting in New York or in San Francisco. The platform is creating an expertise center for the United States but starting in Atlanta,” Mr. Van der Vorst said, highlighting the Georgia capital’s role as a payments hub.

Belgium, too, is encouraging sector-specific development in Georgia and the Southeast, in agritech, logistics and the creative industries, said Mr. Gerebtzoff, who has been making some socially distanced calls on some of the more than 50 Belgian investors in Georgia.

He added that the country is planning a large in-person trade mission next year that is expected to include a visit by some 300 Belgian companies, six ministers and possibly the Belgian princess to Atlanta, New York and Boston.

Arriving in a Pandemic

Arriving in Atlanta or opening a consular office here during a pandemic and an era of heightened racial tensions has been challenging but enlightening for the consuls.

The pandemic has delayed the Dutch consulate’s plans for new office space to provide consular services in Atlanta, but Mr. Van der Vorst expects the new offices to be finalized in January or February.

For Mr. Gerebtzoff, who arrived just a few months ago, virtual meetings have actually allowed him to reach out to more contacts throughout Belgium’s 10-state jurisdiction.

Ms. O’Floinn agreed the “silver lining” of going virtual is that it “pushes us to find ways to connect and probably to work harder to understand each other, which can only be a good thing.”

Making cultural connections and embracing diversity is of utmost importance for each consulate’s relations with constituents.

“There is a business case to be made about diversity; companies who embrace it are more successful,” said Mr. Van der Vorst, whose government has made concerted efforts to elevate diversity issues in the country and throughout its foreign posts.

Mr. Gerebtzoff pointed out that Belgium’s newly elected government has parity between men and women, a second-generation state migration secretary and a transgender vice-minister.

The recent U.S. experience with race and diversity issues has resonated with Ireland, Ms. O’Floinn said, especially since her country is recently becoming more diverse.

“Maybe the sense of community and solidarity that has hopefully grown from everyone’s experience of the pandemic around the world gives us a platform to make some progress and address those issues together.”

The Consular Conversation was sponsored by Miller & Martin PLLC, with the Dean Rusk Center for International Law at the University of Georgia sponsoring Global Atlanta’s Diplomacy coverage channel. Both presented opening remarks.

Join the next event in the series: 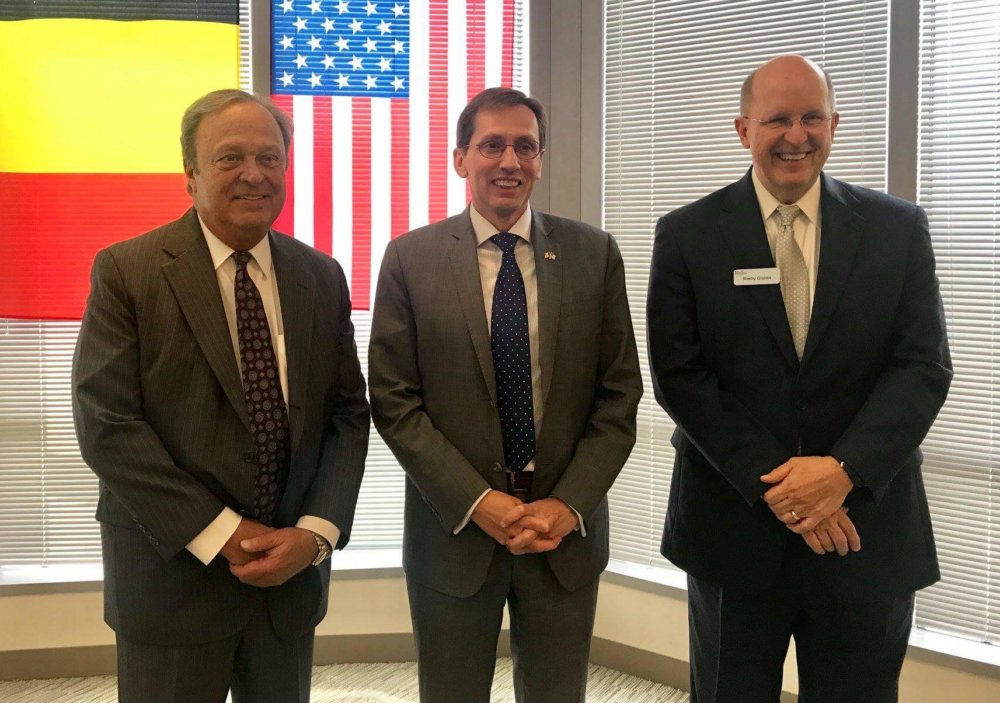 Belgium and the South: Linked Through a History of Global Trade 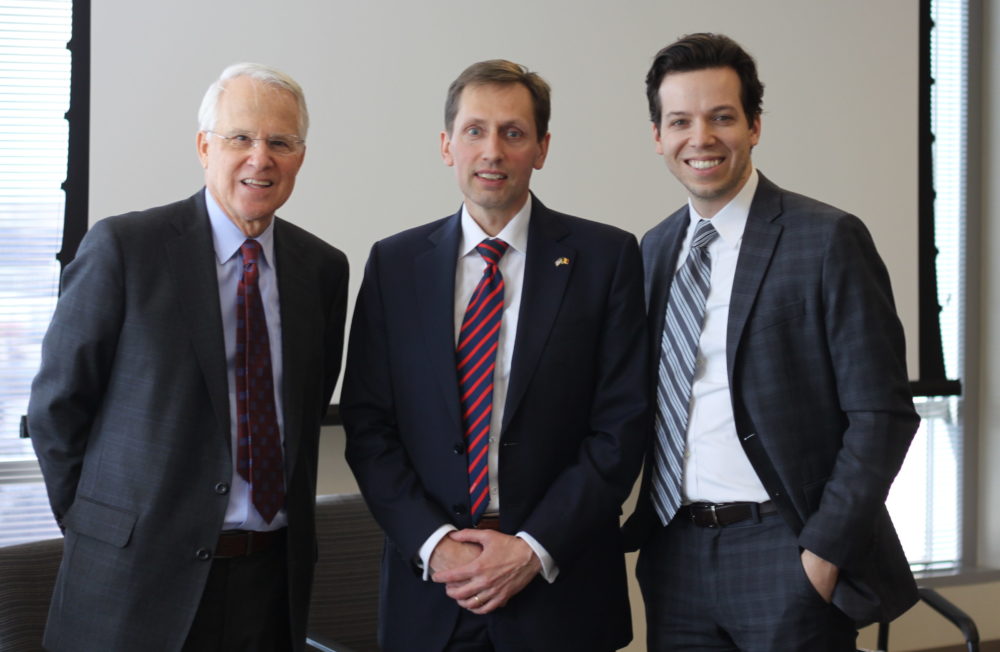 Consular Conversations: Belgium a ‘Mini-Europe,’ Well-Versed in Compromise and Contradiction