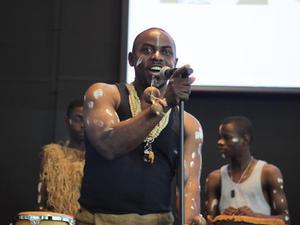 MBondAfrika welcomes guests at the Coke's Africa Day celebration. The annual event brings together the African Diaspora Network, members of the Coca-Cola team that hail from the continent.

Describing Akon Lighting Africa, a company he co-founded to bring solar lights to rural areas around the continent, he described tactics have included “manipulating” the electoral system to get leaders on board.

In case they missed it, the multi-platinum-selling artist repeated himself for emphasis, turning on the charm with his mostly African audience.

“In Africa, you’ve gotta manipulate them. You have to. You have to trick ‘em. No, like, really: You’ve gotta trick ‘em,” he said at Coca-Cola Co.’s Africa day celebration May 27. (Coke hosts employees within its Africa Diaspora Network every May for an appreciation event at the headquarters in Atlanta.)

Aliaune Thiam, better known as Akon, said installing utility-level street lights in villages boosts public safety, while systems in homes and businesses allow children to study at night and entrepreneurs to stay open later, changing fortunes in areas that opportunity has so far passed by.

But he knew that goodwill alone wasn’t enough to persuade leaders to spend public money on an unproven system, so he played on the weaknesses in the system.

One problem with Africans, he said, is that they often lack unity and are hesitant to think about the future.

“Everything is based on today, so I hate to say it as an African, but I kind of used it to my advantage to get the contracts,” he said.

He chose nations with forthcoming elections and offered to install a system for free in the village of the leader’s choice, knowing that electoral politics would work to the project’s advantage.

“It came to the point that once that village was lit up, now the neighboring villages would bring pressure to the government and ask those same questions, ‘How come we ain’t lit up?’”

Apparently it’s worked: the company has spread to 14 countries and reached its goal of providing power to 1 million households. It subsidizes costs for consumers, making the prices of solar competitive with candles and kerosene, which pollutes and causes fires that kill hundreds across Africa each year.

Keeping costs low was imperative to Akon’s vision of making solar lighting as essential to Africans as their ubiquitous mobile phones. That led to another strategic move often seen as anathema in U.S. development circles: partnering with China.

Cheap solar technology had piled up in China, Akon said, thanks to what he described as protectionist tariffs that made it tough for Chinese producers to sell their products in the U.S.

He was able to land a line of credit for up to $1 billion worth of solar equipment with the finance arm of China Jiangsu International Group, a state-owned, Nanjing-based construction firm that has worked in Sudan, Namibia, Angola and elsewhere around the continent. The company’s website says it has $10 billion in assets.

That partnership allowed Akon Lighting Africa to pass along financing terms to governments backing the project, allowing them to pay progressively.

“It gave us the advantage to be able to go into a lot of countries and pretty much start the project immediately without having to go through the World Bank or all these other financial institutions that may take four or five years to clear the finances for it to happen. These guys need electricity like yesterday,” he said, noting that 600 million Africans lack access to reliable power.

In conversation with Lisa Borders, Coke’s vice president for global community affairs, Akon said his quest to transform Africa through power started out due to pure frustration: His packed concerts in the continent were often delayed due to brownouts that could last for hours.

“It could be the biggest concert of that moment, the biggest celebration that particular area had ever seen, but I would always get interrupted. I could be in the middle of a song and the electricity just goes, like, black. Quiet. Nothing,” he said. His team began to bring generators to the shows.

The Missouri-born artist had spent much of his formative years in Senegal in West Africa, but when he finally came to the U.S. for good, he realized how much the continent was lagging.

“Because it happens doesn’t mean that it’s supposed to happen,” he said of power outages, and he resolved to do something about it.

A week before the Coca-Cola speech, Akon, along with fellow founders Thione Niang and Samba Bathily, announced at the United Nations Sustainable Energy for All conference in New York that their company would put a Solar Academy in Bamako, Mali.

Training engineers and entrepreneurs to maintain the systems is key to the company’s goal of providing jobs for Africans, even as it works with technical, marketing and design partners in Germany, the United Kingdom, China and the United States. The company already says it has created 5,000 jobs for Africans.

“It’s almost like teaching them how to fish rather than handing them a fish,” Akon said. “So, now not only do they have a skillset that they can utilize outside this right here, they also have the experience and are able to put something on their resume to say they were a part of something.”

Vuvu Manseka, who works in quality assurance at Coke in Atlanta, has played a key role in organizing the African Diaspora Network. For more information, he can be reached by email here.