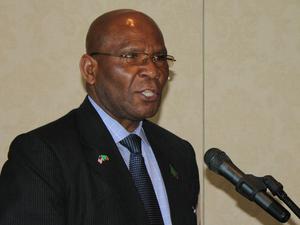 Americans are falling behind other countries in the race to in tap investment opportunities in Africa, which has been unfairly characterized as a “lost continent,” Zambia‘s commerce minister said in Atlanta.

Zambia, a democracy in southern Africa that last year posted 7.5 percent growth to continue a sustained economic upswing, is seeking partnerships, not handouts, from American investors, Robert Sichinga said during a luncheon at the Gwinnett Chamber of Commerce.

“At the end of the day, we are here to market the country,” said Mr. Sichinga, who was leading a delegation of government and business leaders. “We are here to say to you – you, our American colleagues, are lagging behind.”

But Mr. Sichinga isn’t waiting around for American firms to invest in construction, hydropower, tourism and especially agriculture, he said. Mr. Sichinga will soon take similar trips to China, which is already investing heavily in his country, as well as other countries in Europe and Asia.

Greg Marchand, a founder and the current president of the American Chamber of Commerce in Zambia, said the Chinese have a head start in the country.

Americans shouldn’t see Africa as place to send aid, but as a place to invest for the long term, despite perceived risks, said Mr. Marchand, who is also the founder of Gizmos Solutions, a telecommunications company with operations in central Africa.

Mr. Sichinga pleaded with the audience not to lump all African countries together or to believe media portrayals of Africa as a “hopeless” continent.

Instead, he urged potential investors to seek out opportunities in progressive countries with a track record of welcoming foreign investment.

By most accounts, Zambia has done so. The nation of more than 13 million people has been cited by the World Bank as one of the 10 fastest growing economies in the world. It has been a democracy with five peaceful transitions of power since gaining independence from Great Britain in 1964.

Just north of Zimbabwe and south of the Democratic Republic of the Congo, Zambia borders eight countries.

With good infrastructure and positive relations with neighbors, Mr. Sichinga calls it “land-linked” instead of landlocked.

A small market in its own right, Zambia maintains membership in trade blocs including the Southern African Development Community and the Common Market for Eastern and Southern Africa, providing access to more than 230 million consumers.

Zambia is a major copper producer and relies on exports of that commodity for foreign exchange, but the country has been seeking to diversify its economy, offering tax incentives for investors in target sectors, Mr. Sichinga said.

One of those is AGCO Corp., the Duluth-based manufacturer of tractors and other agricultural equipment.

AGCO earlier this month launched a 371-acre pilot farm in Zambia where it will provide a nine-month training course for farmers. Many trainees will go on to work in AGCO retail outlets, helping boost sales in a region the company sees as key to its long-term growth.

As the world’s population swells, Africa has most of the arable land but very little equipment to farm it. While there are 1.8 tractors per farmer in Canada and 1.5 in the U.S., Africa has only five tractors per 1,000 farmers, according to Nuradin Osman, AGCO’s director for the Middle East and Africa, who spoke before the minister.

Fresh from a visit to the AGCO headquarters and preparing for a visit to GE Energy, Mr. Sichinga said companies like AGCO have an “absolutely tremendous” impact on Zambia’s ability to attract more American firms.

AGCO is also investing in a key sector that is not only important for economic growth, but vital to the livelihoods of the Zambian people, he said.

“You cannot go wrong, especially that they’re going into agriculture, which is the mainstay for most of our people in the rural areas especially,” Mr. Sichinga told GlobalAtlanta.