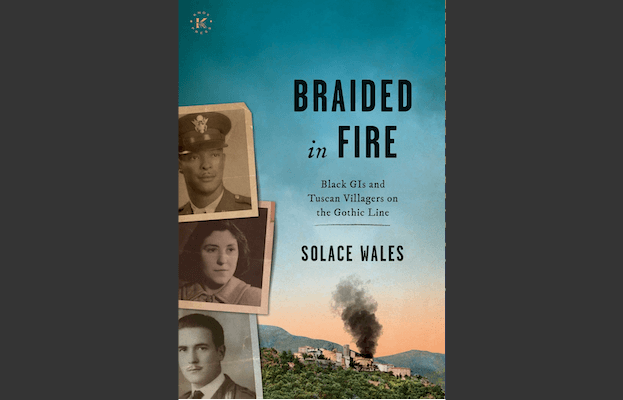 Book: Braided in Fire: Black GIs and Tuscan Villagers on the Gothic Line 1944

This book is a can’t-put-it-downer from the first page. Solace Wales, the author, fell in love with Italy while on a university sojourn in Siena. This led to eventually buying with her husband an old stone house in the village of Sommocolonia in northwestern Tuscany on the eastern side of the Apuan Alps.

Little could she have imagined that this village was the scene of some of the fiercest fighting in World War II between the Germans, as they defended their infamous “Gothic Line” across Italy, and the African American soldiers of the Buffalo Division of the 366th Infantry Regiment on the southern side of the line.

Fluent in Italian, Wales soon became friends with the villagers and farmers. Through these new friendships she became aware of this hidden but glorious chapter in the war’s history. So enthralled was she by this epic story that she spent the next 30 years researching it in breathtaking detail.

The central theme of the book is the gallant story of Lt. John Fox, his incredible fight and sacrifice which resulted in his being awarded posthumously, 53 years later, the Congressional Medal of Honor.

This story in itself would justify this book, but it offers so much more. Ms. Wales seamlessly weaves (hence “braided” in the title) the epic tale of the Buffalo soldiers with the stories of the local villagers and partisan fighters of the resistance to paint a social treatise on Italian society, their plight at the hands of the Germans and with the ultimately conquering Allied Forces. All this may sound confusing, but Wales “braids” these themes together flawlessly.

A gifted writer, her narrative style makes the reader feel physically present during the events described. Ms. Wales could never have imagined that her book was to be published just as the Black Lives Matter movement took off across the States and around the world.

Sadly, if anyone had any doubts about the disgraceful racial treatment of Black men and women in our Armed Forces during World War II, this book will erase them.