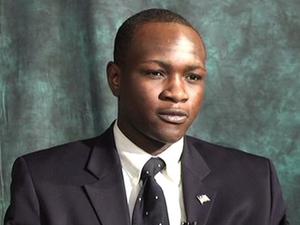 After graduating from Morehouse College in May, Melvin Sirleaf, grandson of Liberian President Ellen Johnson Sirleaf, is trying his hand at diplomacy, interning with the African country's honorary consul in Atlanta, Cynthia Blandford Nash.

Mr. Sirleaf is one of the first participants in a junior diplomat program launched by Ms. Nash, whose connections to Liberia go back to 1974 when she went there on a Rotary International scholarship immediately after high school.

"I think he'll be excellent this summer and hopefully take this skillset and perhaps do something promising to make a difference in his country," Ms. Nash told GlobalAtlanta.

Mr. Sirleaf moved from Africa at age 12 and spent his high school years in Charlotte, N.C., before attending Morehouse in Atlanta, where he majored in finance and minored in economics. This summer, he has attended variety of diplomatic events and business meetings with Ms. Nash and represented her at others when she could not attend.

His grandmother was elected president of Liberia in 2005, the first woman head of state in Africa's modern history. She has been working to rebuild a country that suffered two devastating civil wars, with the fighting ending in 2003.

Many Liberian men the same age as Mr. Sirleaf were child soldiers, missing school and now lacking the education or skills to work. Eighty percent of the labor force is unemployed, according to the CIA World Fact Book.

"I relate to them because we are about the same age," Mr. Sirleaf said of the young people caught in the civil wars. "They have the potential to do something better. That is what inspired me. Their story is my story. I represent them here in America by doing the best I can, getting the best education I can."

Mr. Sirleaf plans to eventually return to Liberia, where he sees both education and finance as the key to the country's future.

"Part of the reason why Liberia sunk into civil war was [financial] mismanagement."

The World Bank recently canceled Liberia's $4.6 billion debt as a way to help its economy bounce back from years of war.

"That gives Liberia the opportunity to get its financial house in order," said Mr. Sirleaf. "The job going forward is to make sure that whatever debt they take on is well financed and they have things in place that will help them manage their finances and budget."

He believes Liberia will be a much stronger country 20 years from now when a new generation of Liberians that has known peace and been educated enters the workforce.

She first went to Liberia, a country of about 3.5 million founded by freed American slaves, on a year-long scholarship after high school and fell in love with the country, attending two semesters of college at the University of Liberia.

She returned for a visit in 1998 after the country's first civil war. "The devastation broke my heart," she said.

When Ms. Sirleaf was elected in 2005, Ms. Nash vowed to help the country recover.

"I made a commitment to her to help bring change, resources and economic development and trade to the country," said Ms. Nash.

Liberia is getting back on its feet under Ms. Sirleaf's leadership, Ms. Nash said, with roads improved and a strong emphasis on education.

Ms. Nash, who is CEO of Global Strategies for Good LLC, which specializes in international business-to-business matchmaking, helped foster discussion of a direct Delta Air Lines Inc. flight from Atlanta to Monrovia, Liberia, which starts Sept. 4. She said she worked closely with Archie Williams, Liberia's director general of aviation, who was instrumental in making the deal happen.

She also helped develop a relationship between the Georgia Ports Authority and the National Ports Authority in Liberia, with the two scheduled to sign a memorandum of understanding in Savannah Aug. 4.

The new Delta flight will help foster trade between Georgia and Liberia, she added, because the travel time will be reduced from 24 hours to 12. Although a poor country, Liberia is rich in natural resources such as timber, iron ore and gold, said Ms. Nash.

"The relationships between Atlanta and Monrovia will increase exponentially," she said.

Atlantans who want to go on the inaugural flight and trade mission should contact Ms. Nash by e-mail at admin1@liberianconsulatega.com.

The Future Has Changed, So How Do You Thrive?