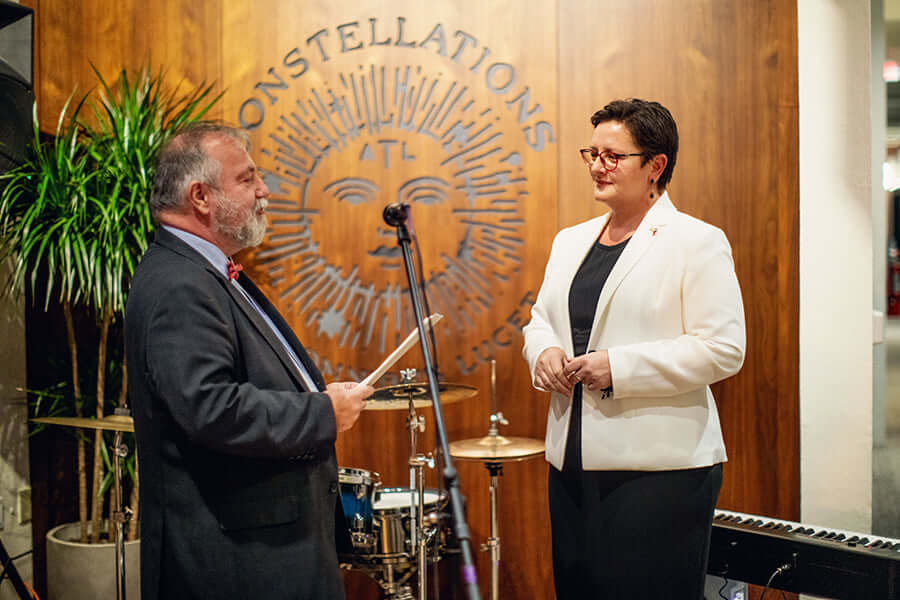 On Nov. 13, Ambassador Hynek Kmoníček presents papers officially installing Monika Vintrlikova as the Czech honorary consul in Atlanta. She has been serving in the role since Oct. 1. Photo: Honorary Consulate of the Czech Republic

Hynek Kmoníček has obviously given some thought to the interplay between music and diplomacy.

But rather than the classical he learned growing up in his then-communist country, the ambassador of the Czech Republic to the United States sees the clearest analogy in between the two in the “organized freedom” of jazz.

Mr. Kmoníček visited Atlanta Thursday to officially pass the torch to Honorary Consul Monika Vintrlikova, who took over the position from the late George Novak, who died in June at 88, having served in the role since 1994.

Aside from an outdoor ribbon-cutting at the consulate’s Sandy Springs office and one-on-one meetings with state officials, Ms. Vintrlikova’s options for publicly marking the milestone with a reception were limited.

As a nod to the ambassador’s love of music, she arranged a socially distanced jazz exposition at Constellations Community in Atlanta’s Sweet Auburn district, inviting a select few attendees and mandating masks. Global Atlanta, which is based in the civically minded workspace, caught up with him there.

“There is a connection between jazz and diplomacy because you must be able to improvise in both. You improvise based on your feelings and the reactions of the audience,” the ambassador said in an interview. “And both are organized freedom, because disorganized freedom is anarchy, and anarchy and chaos sound like anarchy and chaos. Nobody really wants to listen to it for more than 15 seconds.”

In diplomacy, he said, the art lies in the way one plays within the bounds of decorum and the rules of diplomatic engagement.

“In that box, you have your freedom,” he said of jazz. “It’s the same in diplomacy. You cannot push too much, or the box breaks.”

Mr. Kmoníček’s own unconventional diplomatic riffs are well-documented. A self-taught cook and the collector of more than 400 hot sauces from around the world, he recently entered a competition meant for chefs at diplomatic residences in Washington D.C.

A news profile two years ago showed the walls of his home adorned with animals he has killed while endearing himself to host cultures, from the small crocodile that fell to his knife in Sudan to the Mongolian wolf and the snake he pulled from a drain in India.

His education was similarly eclectic. After a degree in classical guitar and education, he was assigned to teach the instrument to young people under 12, presumably because anyone older would have been susceptible to absorbing his ideology.

He later returned to university, first for a master’s in English and Arabic language in 1989. After the transition to democracy, the country was in dire need of public servants trained in language and culture. Mr. Kmoníček earned a doctorate in the Modern History of the Middle East at Hebrew University in Jerusalem, specializing in Qur’anic Arabic with a thesis on the Buddhist and Hindu influences on early Sufi mysticism. He joined the foreign service in 1995, the year he graduated, and started on the Middle East and Africa desk. All that has come in handy recently in Syria, where the Czech Republic represents U.S. interests in light of the latter’s diplomatic absence from the war-torn state.

Mr. Kmoníček argues that it was natural for Czechs of his generation to seek disciplines that would serve as tickets out of their own repressive country. The main portals to the outside world were scholarship, sports and music.

“The Communist regime basically made money on us. Every time, they took a significant portion of your salary once they let you play ice hockey or Johann Sebastian Bach abroad,” he said.

Living in the waning days of the Communist regime, one could feel the “emptiness of the moment,” the fact that they had “lost the will to rule,” Mr. Kmoníček said. But no one knew — even up to the day it began in earnest on Nov. 17, 1989, that the nonviolent transition known as the Velvet Revolution would happen while they were alive to reap the benefits. It was always a fight for the next generation.

“If there is a lesson in what we went through, it is that there is no chance to see what’s coming. None of us expected the change will happen in our lives. Most of us expected that we will have to emigrate and we will never see country again.”

Instead, he travels to represent a country steeped in history but only 31 years old. His training has netted him ambassadorships to the United Nations, India, Australia, culminating now in what has perhaps been his toughest task yet: “translating America” to Czechs during the Trump administration.

“If you are a Czech ambassador to the United States, you are expected to be sort of the translator of American realities to the Czech political vocabulary. It’s not just a question of of language; it’s a question of cultures.”

Lately, that has meant practically “living in Czech TV,” explaining the intricacies of the electoral college and helping people back home understand why it has taken so long to certify the result of a presidential contest.

In this direction, he’s asked to sound off on why the Czech Republic, a European pioneer of the use of masks in combating the coronavirus pandemic recently found itself at the crest of a vicious second wave. (The answer? “We relaxed, completely, and the result is that we woke up to have the highest mortality in the world with the same system, same hospitals, same people. It’s not over till it’s over.”)

But the background of the former deputy foreign minister and presidential adviser, who became ambassador just a few months after President Trump’s inauguration in 2017, has also helped during a time when the transatlantic relationship has been tested by some moves that threaten to “break the box” of traditional engagement.

Indeed, a question that will last after Mr. Trump’s presidency is whether he pushed too far. Some welcomed the disruption, saying he penetrated to the core of problems long papered over by the sappy language of “shared values” or simple bureaucratic inertia.

For Mr. Kmoníček, Mr. Trump was a “magnifying glass” on problems that were present long before his arrival. He was the “result,” not the ultimate source, of tensions on trade, NATO and beyond.

“Of course, he brought into it his personal type of rhetoric, which is not exactly diplomatic. And sometimes it helps, sometimes it doesn’t. Quite often, the result is based on what you are used to and what you expect from the partner,” Mr. Kmoníček says.

To awaken the “classical European” in Brussels, cutting through the noise with potent language can be useful, Mr. Kmoníček. But it can’t end there, he cautioned in a piece of advice that could prove crucial for President-elect Joe Biden.

“That’s more or less what we expect from Americans — to go directly to the bone. But you cannot break the bone, and there must follow a very detailed, very technical, precise discussion. If there is not a followup from the first robust shot, then it leads usually to nowhere with European partners,” he said.

On this side of the world, the Czechs are taking no chances. The embassy has set up a network of some 25 honorary consuls, including Ms. Vintrlikova in Georgia.

An entrepreneur, she came to the U.S. in 2013 to expand her family’s business supplying metal to the automotive sector. ALBAform now employs more than 120 people at its factory in Flowery Branch, Ga.

Her success serves as a qualification for the diplomatic role, Mr. Kmoníček said.

“We are actively looking for people who have achieved something, who are willing to share, who are very much ingrained in the American life around them and, at the same time, never lost their Czech roots. And then it doesn’t matter if the person is an important local musician, entrepreneur or a sports coach,” the ambassador said.

He had just driven to Atlanta from New Orleans, where he’d held an annual conclave of these appointed diplomats, outlining objectives from the top but emphasizing their ability to shape their agendas. Ms. Vintrlikova’s strengths dovetail with those of both the Southeast U.S. and the Czech Republic; both are strong automotive manufacturing hubs.

With mentorship by Mr. Novak, the only honorary consul in the U.S. ever to have received an award from the Czech president, the ambassador did not seem worried about how she’d perform in the job.

“I wish you great success — and at least 60 years with this consulate,” he said jokingly as he presented letters officially installing her in the role.

“This is a bittersweet moment,” Ms. Vintrlikova said to the group of family, co-workers and friends including Mr. Novak’s widow, Jana, assembled at the reception. “I’m here, but that means George is not. Nobody can replace him, but I will try my best to continue the work. That’s all I can say.”

Soon after the remarks, the jazz began, calling to mind earlier concerts in organized in collaboration between Mr. Novak and Global Atlanta.

In 2015 and 2018, the publication and the honorary consulate banded together to bring Czech jazz pianist Emil Viklicky to Atlanta, the second time having him perform in honor of the Czech School of Atlanta, another cultural asset the new honorary consul will aim to preserve and grow.

At the first show, Mr. Novak had arranged for a bit of diplomacy interspersed with the music, with the longest serving member consular corps passing the torch to the next amid Mr. Viklicky’s trademark blend of Moravian folks tunes with jazz. 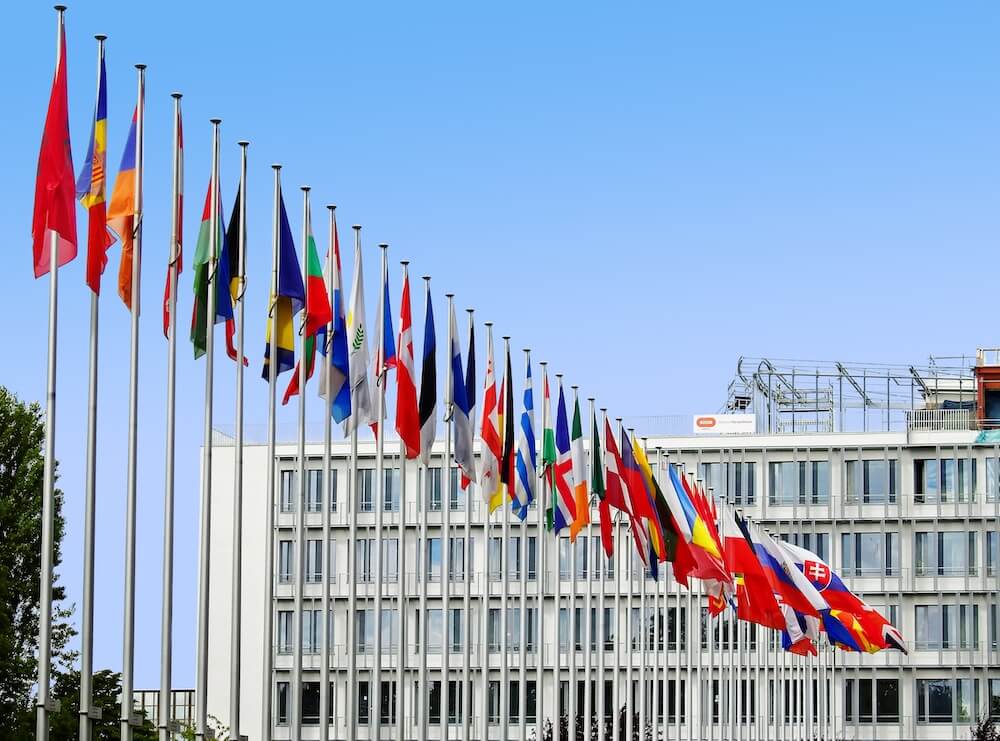 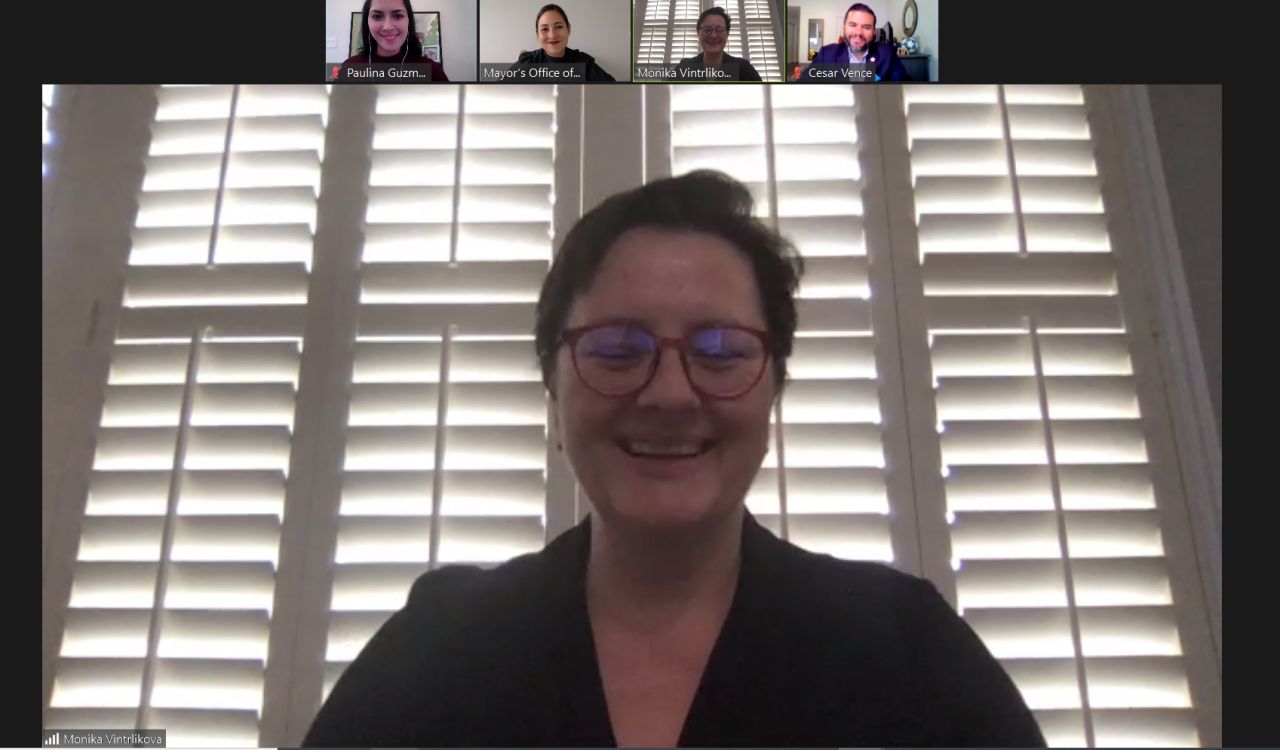 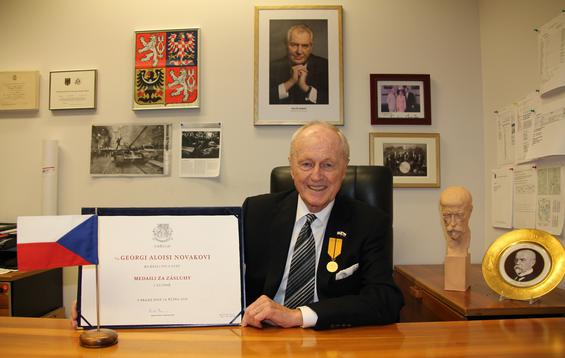