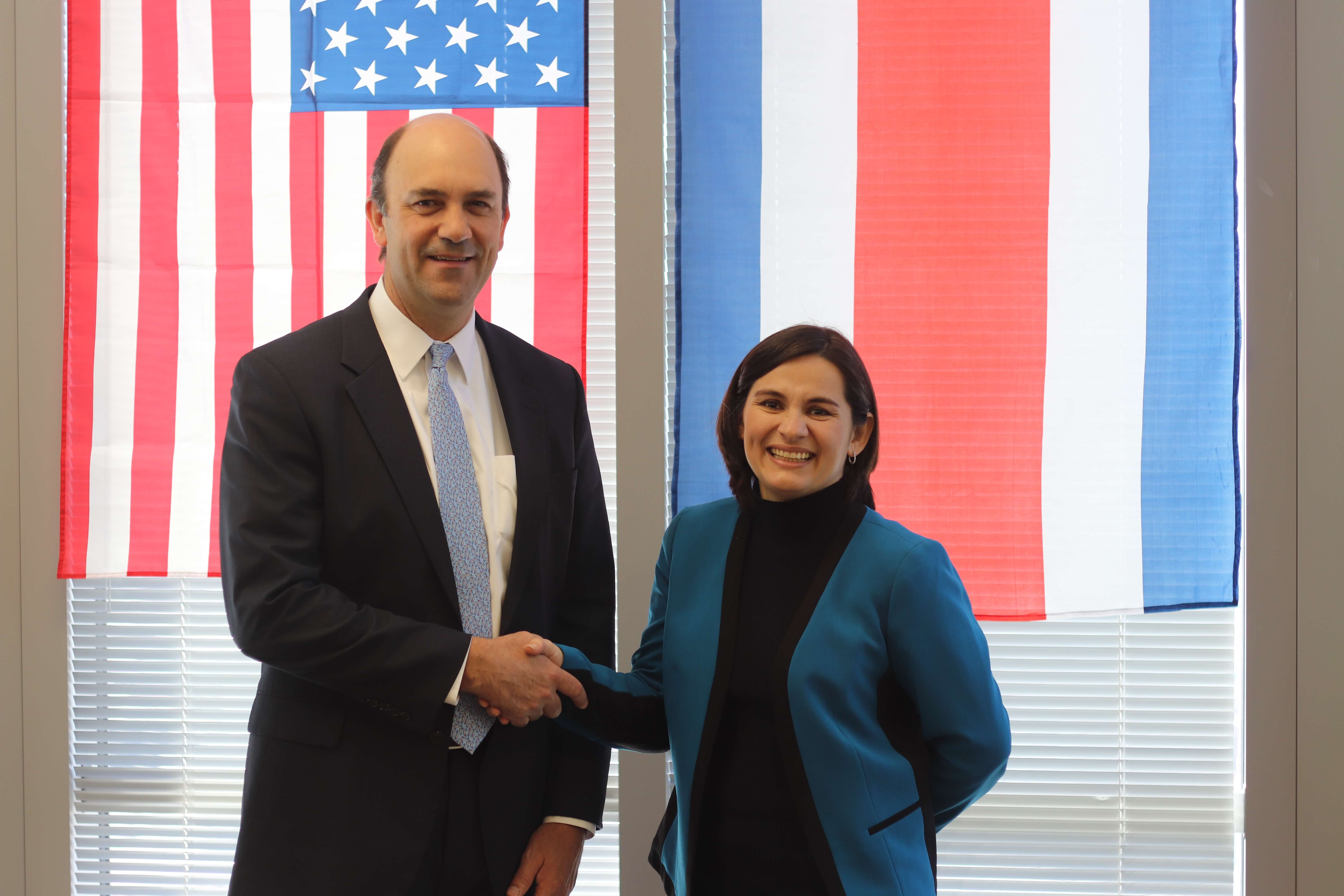 Costa Rica’s easygoing lifestyle and laid-back, “pura vida” vibe has been a godsend for tourism, but it has sometimes had a negative side effect: turning off other investors accustomed to a more expedient way of doing business.

It doesn’t have to be that way, says Consul General Flora Leah Venegas Corrales, who represents the Central American country in Atlanta. Preparing is simply a matter of learning how to go with the (slower) flow.

“It all starts with a coffee,” Ms. Venegas told Global Atlanta in a recent Consular Conversation, a monthly interview and luncheon hosted and sponsored by the law firm of Miller & Martin PLLC.

She specifically means a meeting with a government touchpoint, perhaps with her small office in Atlanta that deals with the Costa Rican community in six Southern states. Or maybe a visiting delegation from CINDE, the investment promotion agency that helped arrange the former president’s stop in Atlanta two years ago.

Either way, investors need initial exposure to someone who understands the way of life — and more importantly, the business atmosphere — in a place as brimming with opportunity as it is different from the U.S.

Some Americans have had bad experiences — from buying retirement homes to developing major branded hotel properties  — because they’ve traded cultural due diligence for prospective returns on paper. Rationality then crowds out relationship.

“Most people who had a bad experience … it was because they weren’t guided by someone who could really help them and point them where to go.”

Ms. Venegas can seem a bit shy at first glance. But get her going, and she can be a prickly but charming apologist for her country. Maybe it’s her training as an attorney, a career that gravitated toward criminal law before she took a turn and became diplomat.

It turns out this shift wasn’t the hard pivot she thought: Serving in the consulate in David, Panama, a border town with Costa Rica, she saw it all: human and drug trafficking, smuggling and the nitty-gritty of immigration issues.

“There, I had to learn about reality, and when I say reality, it’s reality,” she said. “It seemed like life was taking me back again to criminal law, so after that, I decided I did not want that path again.”

She also served in Miami, where the pace was much faster but the issues more straightforward. Sometimes the consulate there would see 70-80 people a day. Here in Atlanta, the maximum daily flow of people is about 10, and most of those who seek visas or other assistance come from out of state. (Apparently Costa Ricans like North Carolina.)

But Ms. Venegas does usually have a full email inbox when she arrives in the office around 9 a.m., with messages flooding in from both Costa Ricans and Americans. Topics run the gamut, from how to gain citizenship or retire in Costa Rica (a popular query in the last few years as its brand has taken off) to concerns about basic investment issues.

Beyond Bananas and Coffee

Business questions are becoming more common as Costa Rica’s reputation as a technology and business hub grows. And while the county still relies in part on agriculture, its economy has climbed the value chain.

During multiple reporting trips to the country, Global Atlanta has found companies tend to be happy with the labor force they can recruit, especially in the newer industrial parks outside San Jose, the capital.

But some are going even further, offering English courses and specialized industry training. Joint efforts between universities and the private sector are growing more common as employers develop a specialized workforce.

Startups are emerging, and people are more willing to branch out on their own rather than running back to well-trodden paths like law school or public service, Ms. Venegas said.

“We have put that seed in our people. They want to learn more, develop more, know more,” she added.

And now Costa Rica has become a leader in environmental protection and green living, drawing accolades at a time when many around the world worry about the impacts of climate change.

Ms. Venegas sees the impact in her hometown of Escazu, a suburb of San Jose, where it doesn’t rain like it used to, and the summers seem hotter than before.

At the highest levels, leaders are doubling down on the country’s outsized reputation for tackling big environmental issues.

New President Carlos Alvarado of the left-leaning Citizens’ Action Party has pledged to eliminate fossil fuels in the country by 2021, an ambitious goal that will require a vast commitment beyond existing incentives for electric vehicles. Costa Rica may be green from a grid perspective, with much of its energy supply coming from hydropower and other renewables, but 99 percent of cars sold in the country last year use gas.

Ms. Venegas and other Costa Rican leaders trace their success back to the decision to trade in weapons for education in the aftermath of World War II.

In 1948, Costa Rica abolished its military after a brief civil war. The government has invested the savings into its most valuable resource: people.

“If you don’t have to form soldiers, you have to form citizens. And it seems if you invest in people, the results are very good,” she said.

From the earliest days of its founding as a republic, schooling was compulsory in the country, the result of forward-thinking leaders who saw the need even in the 19th century to grow a solid base of workers.

‘We were going to be planting coffee and bananas forever” if nothing was done, Ms. Venegas said.

This is not to say that Costa Rica doesn’t have its problems in education; rural schools, especially, face funding challenges and teacher shortages at times. But education has been essential to Costa Rica’s ability to distinguish itself as more of a knowledge economy, a move that has brought rising incomes.

Georgia groups have been integral to this growth, especially at the university level. The Atlanta-based EARTH Foundation supports the eponymous university there, while CATIE backs tropical agricultural research. University of Georgia runs a campus in the cloud forest of Monteverde, while Georgia Tech has a logistics center in San Jose to help farmers and companies get products to market more quickly.

Ms. Venegas welcomes such investment in her country’s secret weapon, and she invites those interested in doing more to visit her for — you guessed it — a coffee and conversation. 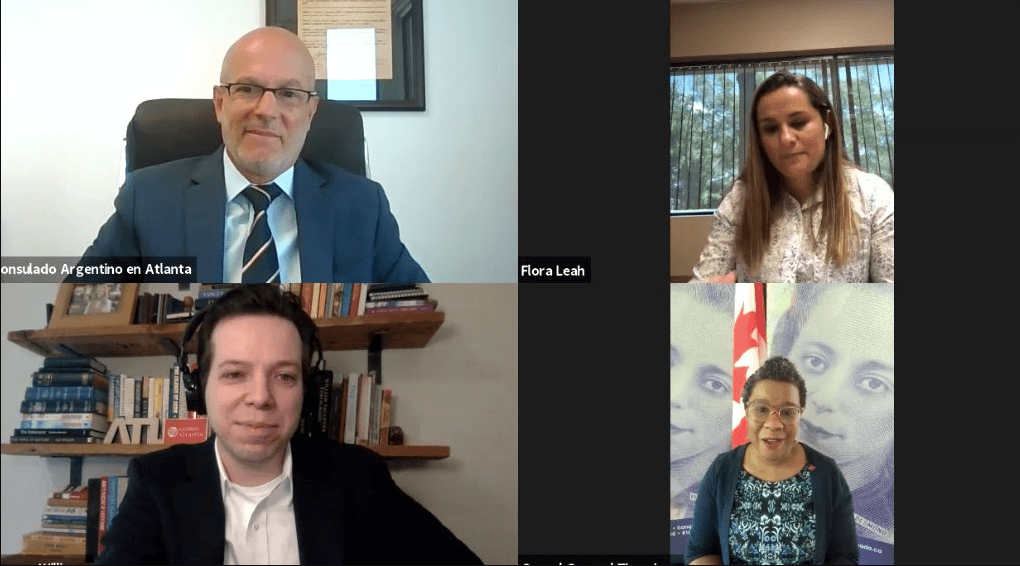 Keeping It Personal: How Diplomats From Argentina, Costa Rica and Canada Have Weathered the Pandemic